The third round of European Enduro Championship (EEC) is being held at Ogre, in Latvia. At the end of the first day there was a new overall winner: KTM rider Jaromir Romancik from Czech Republic (in photo 1) was the fastest rider of all, finishing 23 seconds in front of his rivals.
Second position of the day for Italian Nicolas Pellegrinelli (in photo 2), but with this result he catches the leading position of the championship. The former leader, Brad Freeman, could not start after surgery to his shoulder. Third position of the day for Junior Andreas Linusson from Sweden, who felt at his ease in the sand.
In fact, both crosstest and the first enduro-test were sandy, partly very deeply sandy, but the second enduro-test was with hard ground in a former quarry, full of stones. And at the end, because of some rain, this test revealed very slippery. Due to the rain there were also some muddy holes on the last stage, which lead back to the paddock, where some riders got stuck for a while.

On this terrain, even if it is not so popular among Italians, the Suzuki rider Guido Conforti won the E1-class in front of Thierry Pittens from the Netherlands, who is known as a specialist of sandy conditions. Jaromir Romancik did not only win the Overall, but the E2-class as well. Behind him, the other sand specialists: Tommy Sjö-ström and Ivo Steinbergs from Sweden.
Maurizio Micheluz was beaten in the E3-class for only 1,1 second: it was Rannar Uusna from Estonia to win the class with his KTM.
Jane Daniels from England won again the Women Class more than 1 minute ahead of Marita Nyqvist from Finland, who had no problems with her small 125cc-Yamaha in the deep sand.
In absence of the reigning champion Werner Müller, Sebastian Krywult from Poland won again the Veteran Class.
The event of tomorrow can be followed through live-timing at the following link: http://www.casomeric.cz/enduroonline/
More information on the official website: http://european-enduro.com/ 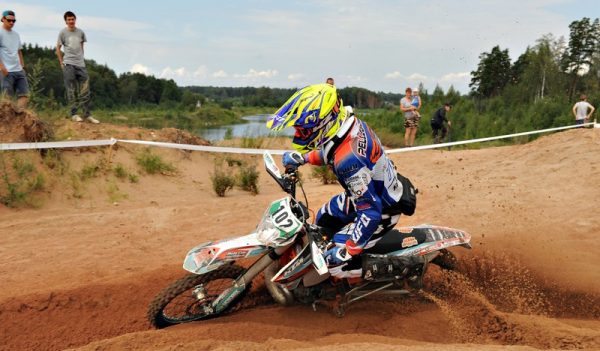